The Society of St. Vincent de Paul Exeter (SVdP), NH Conference was formed in 1989 with a simple mission: provide emergency food and assistance to those in need when other available resources have been exhausted.

In 1833, scholar and advocate, Frederic Ozanam and five student friends founded the Society of St. Vincent de Paul to assist the poor in Paris, France. The organization expanded to the United States with the foundation at the Basilica of St. Louis in St. Louis, Missouri, in 1845. Since the inception, the Society of St. Vincent de Paul has grown to include conferences in 150 countries and more than 4,400 conferences in the United States alone.

The Society of St. Vincent de Paul Exeter began serving the poor and hungry in Exeter in 1989 out of a building provided by St. Michael Parish. In 2011, SVdP purchased the vacant bank building located at 53 Lincoln Street. After 22 years of service to the less fortunate, SVdP acquired the independent building that allowed us to serve our clients more efficiently, with dignity and respect. With the new space, SVdP was able to become the Community Assistance Center.

With the Center collaborating with and housing many local agencies such as Rockingham Community Action, Volunteer Income Tax Assistance, Families First medical and dental care, and Medicaid application assistance,  SVdP quickly ran out of space. In 2015 it was clear that the new building had become too small, and expansion was built with the help of the community. Three new offices, a conference room, and an expanded pantry area were added to the building.

The Society of St. Vincent de Paul Exeter offers food and emergency financial assistance to residents of Exeter, Stratham, Newfields, Brentwood, Kensington, and East Kingston. Services at the Community Assistance Center, such as dental care and homeless support, are available to anyone in need. 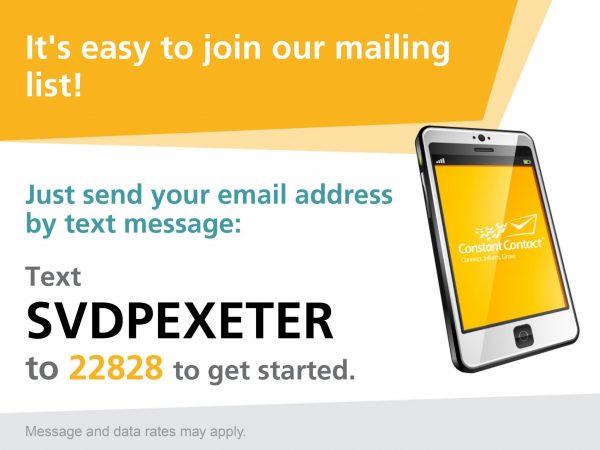